Today we would like to take a short moment to celebrate a victory for supporters of original content all over Second Life. Over the course of last week a creator by the name of Aerofly has lost their Bell 212 helicopter to a DMCA take down request. The evidence for it having been taken down is simple, it is no longer available on Market Place suddenly having only been released for a short time.


BUT WAIT THERE IS MORE!

A concerned resident has shared with us the following emails (name has been blanked for respect for the provider):

Dear ***************,
Thank you very much for bringing this into our attention. They even stole the liveries which shows that they have zero respect towards us. Blatant stealing and laugh in the face.
We will take the necessary measures.
Thank you very much again.
Best regards,Nemeth Designs Development Group.


Sent from my Samsung mobile device.


Hi there,
I wanted to report that a user "AeroConstructor Firehawk" in the
virtual world Second Life is using a Nemeth design's Eurocopter EC-135
model and textures in their own product and is distributing it as
their own creation on Second Life's Marketplace. I have supplied a
comparison image of the two products as an attachment to this email.
Link: https://marketplace.secondlife.com/p/AeroFly-EC-135-Eurocopter/5358427

You may want to have your development team observe the marketplace
images for comparison.

This seems to be a breach of your company's Copyright and Intellectual
property rights. If you wish to take action, you can file a DMCA claim
against this user. Here are the instructions:
https://secondlife.com/corporate/dmca.php

If you need more information please feel free to contact me.

The helicopter in question is the Aerofly EC-135

And its original model and livery provided courtesy of a short search for the Flight sim creator's EC-135 gave us this:

Given the creator has already said that this is indeed thier product without their permision we will offer no further evidence at this time and simply say:

It has been a while since we have felt the need to post on this blog but again comes the time when new and distressing information comes along. Today I present to you evidence that is not my own but has come to me by way of an anonymous member of the community. We will not do our usual trick of posting pictures and explaining to all of you who are unfamiliar with the ins and out of modeling as we feel this bit of forum post on a Microsoft Flight Simulator X creator's forum is fairly self explanatory.

Here yet a second anonymous resident in our community has found and the creator confirmed the source of Dani Airplanes' Airbus A-318. It appears to be this airbus from Project Airbus, a group of FSX modelers creating various renditions of the Airbus line for add-ons for the ever popular flight sim.

Also by yet a third anonymous resident in our short story today we seem to have found the download source for many of Dani Airplanes' downloads. A coincidentally Brazilian blog featuring many pay ware downloads shared openly for free. Take a look, see a few familiar faces? It is sad to see that even when caught red handed such people continue and attempt to cry as the victim. So to close us out with an old and worn out phrase that we all know:


Buyer be ware Dani Airplanes is a known and confirmed mesh thief
Posted by Expose Second Life mesh stealers at 5:40 PM No comments:

AEB&W, owned by Annitah Babii, is an SL Marketplace based merchant that sells mostly Military jets. An anonymous tip lead us to the believe that these planes had been taken out of a game called Tom Clancy's H.A.W.X, a video game created by Ubisoft.

The product: AEB&W LTV A-7 Corsair II
The Original: A-7 Corsair II from Tom Clancy's H.A.W.X. by Ubisoft, model found on TF3dM.com (top) AEB&W's A-7 Corsair II
(bottom) H.A.W.X. A-7 Corsair II on TF3dM.com
You will notice on the vendor picture that under the cockpit is the name "W.T.PATTON". This name is only used on official  H.A.W.X aircraft and is a spoof name used for the pilot. You will find this on many H.A.W.X aircraft. 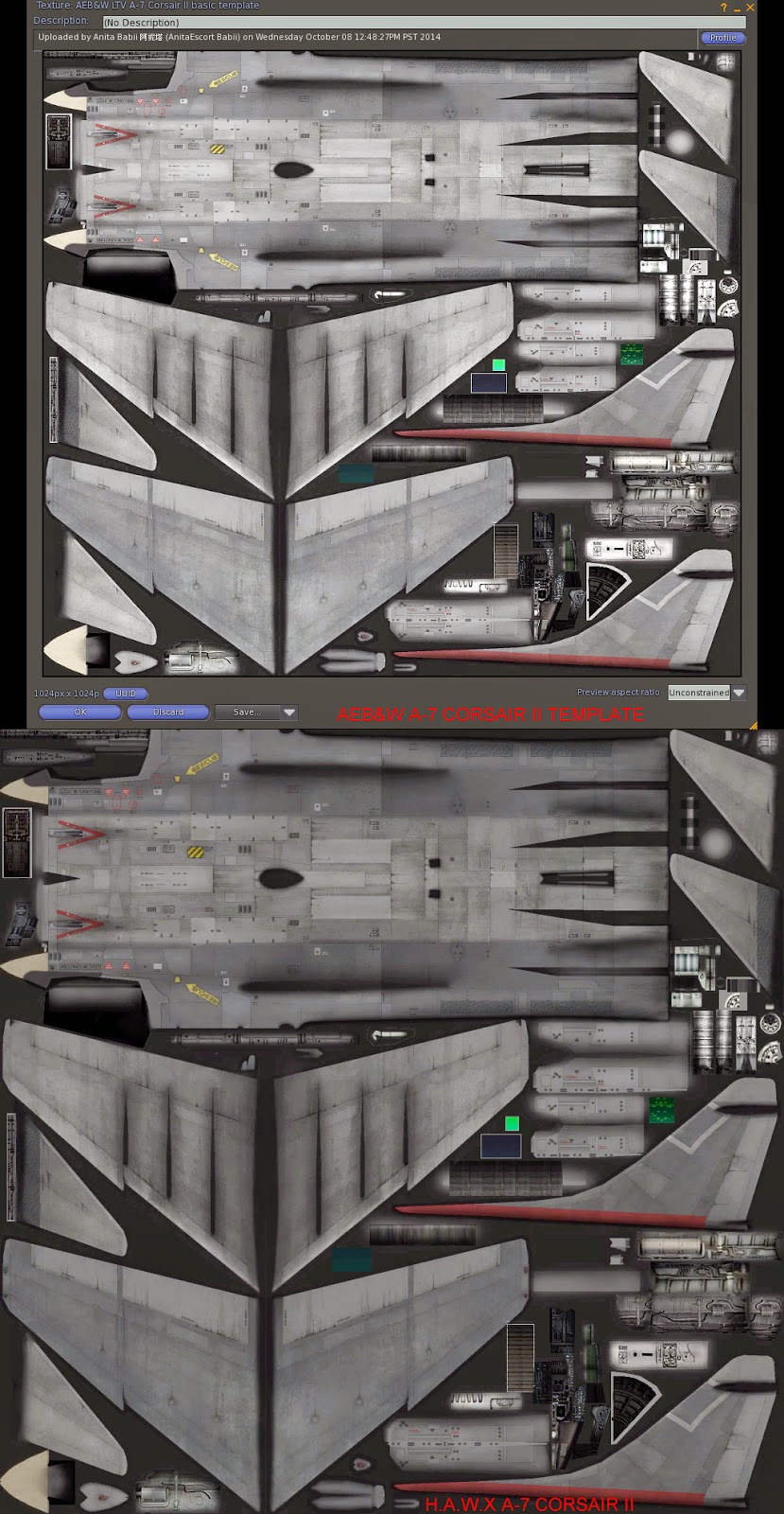 (top) AEB&W's Corsair II template (bottom) H.A.W.X. Corsair's official in-game skin
The UV map and texture quality are an uncontested match. It looks like AEB's texture has been lightened and sharpened in a photo editing program. 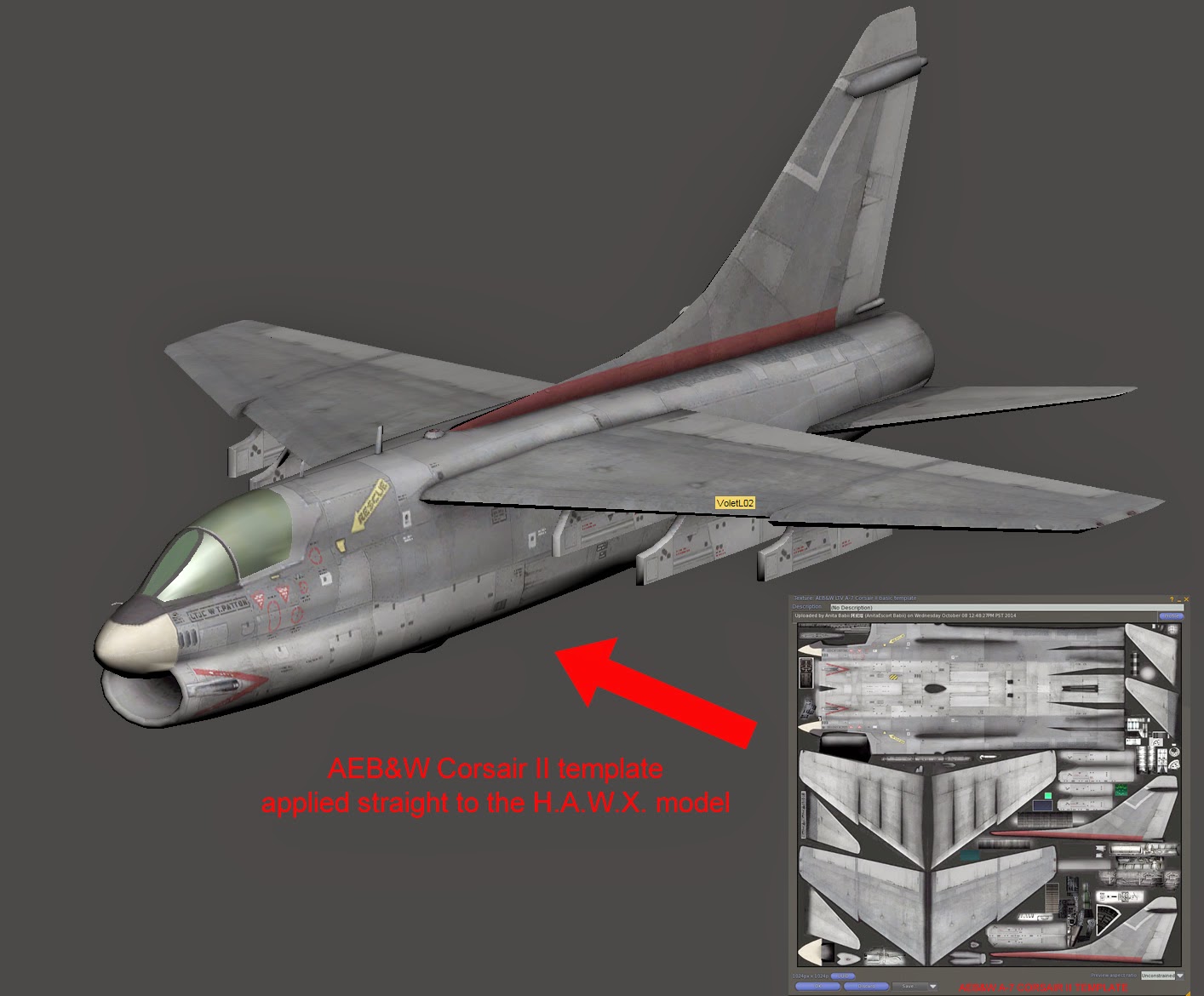 We could put the template texture that was supplied by AEB&W from Second Life, and assign it on the official H.A.W.X. model in our 3D program. This is defiantly the same texture. 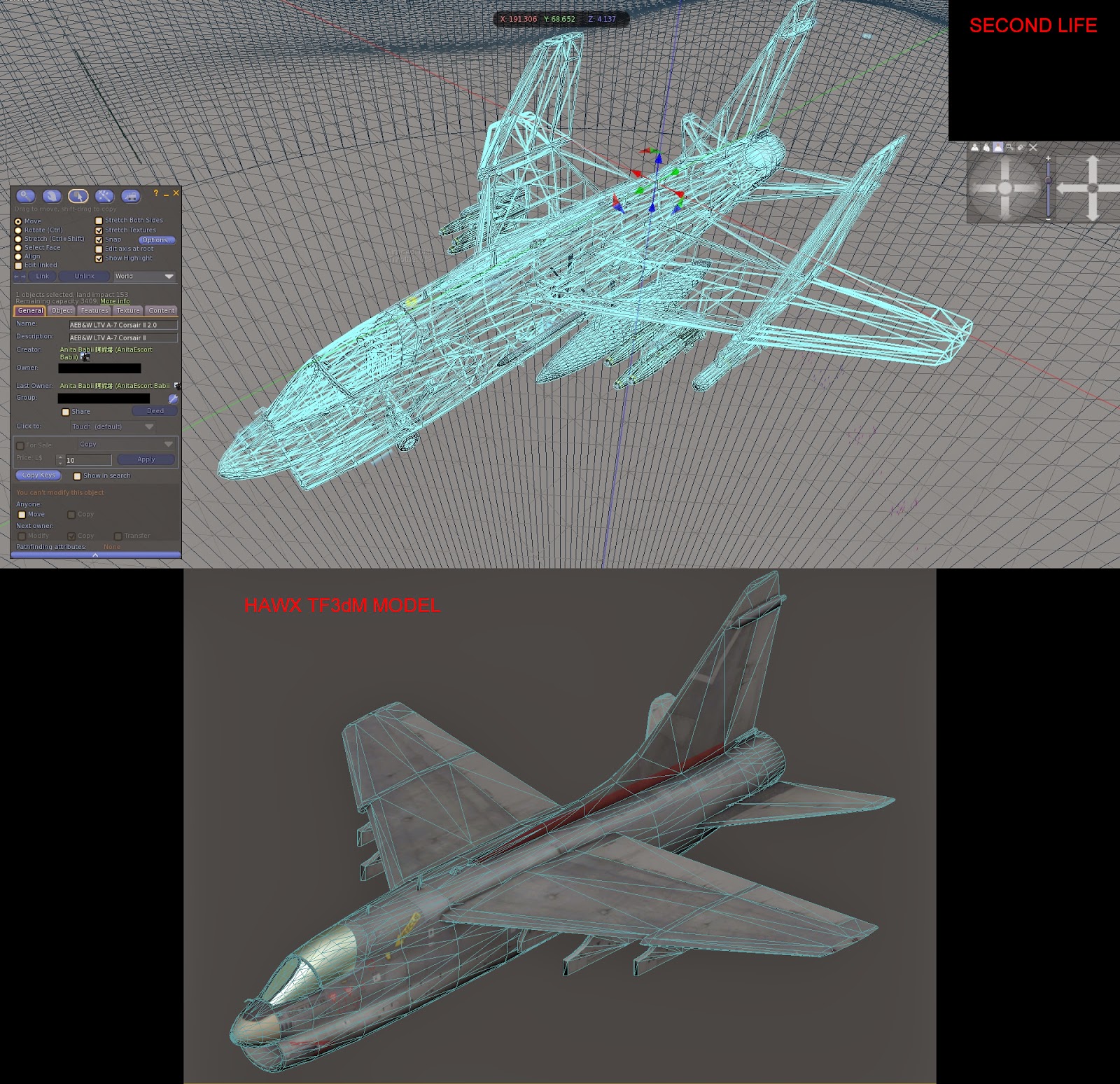 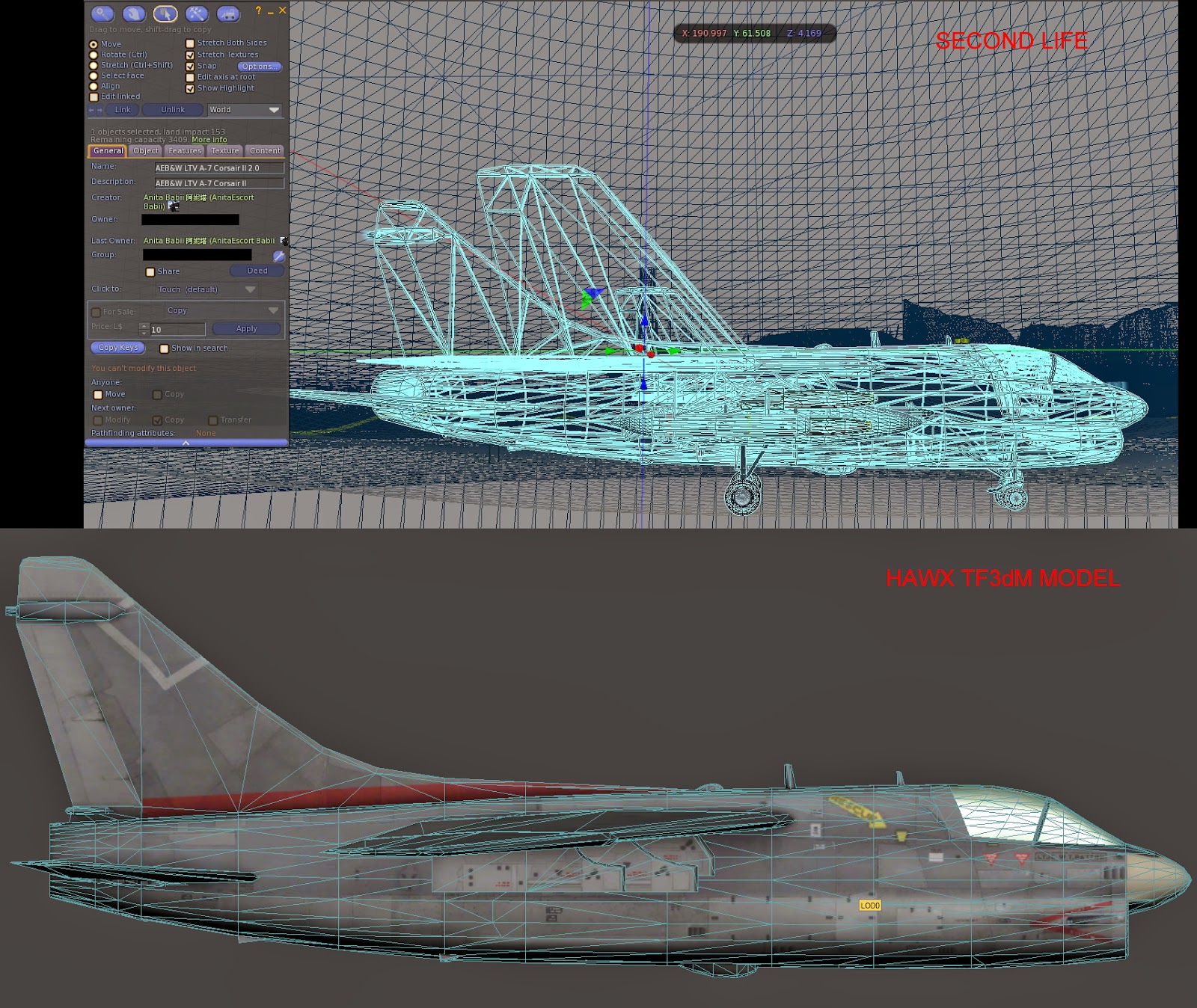 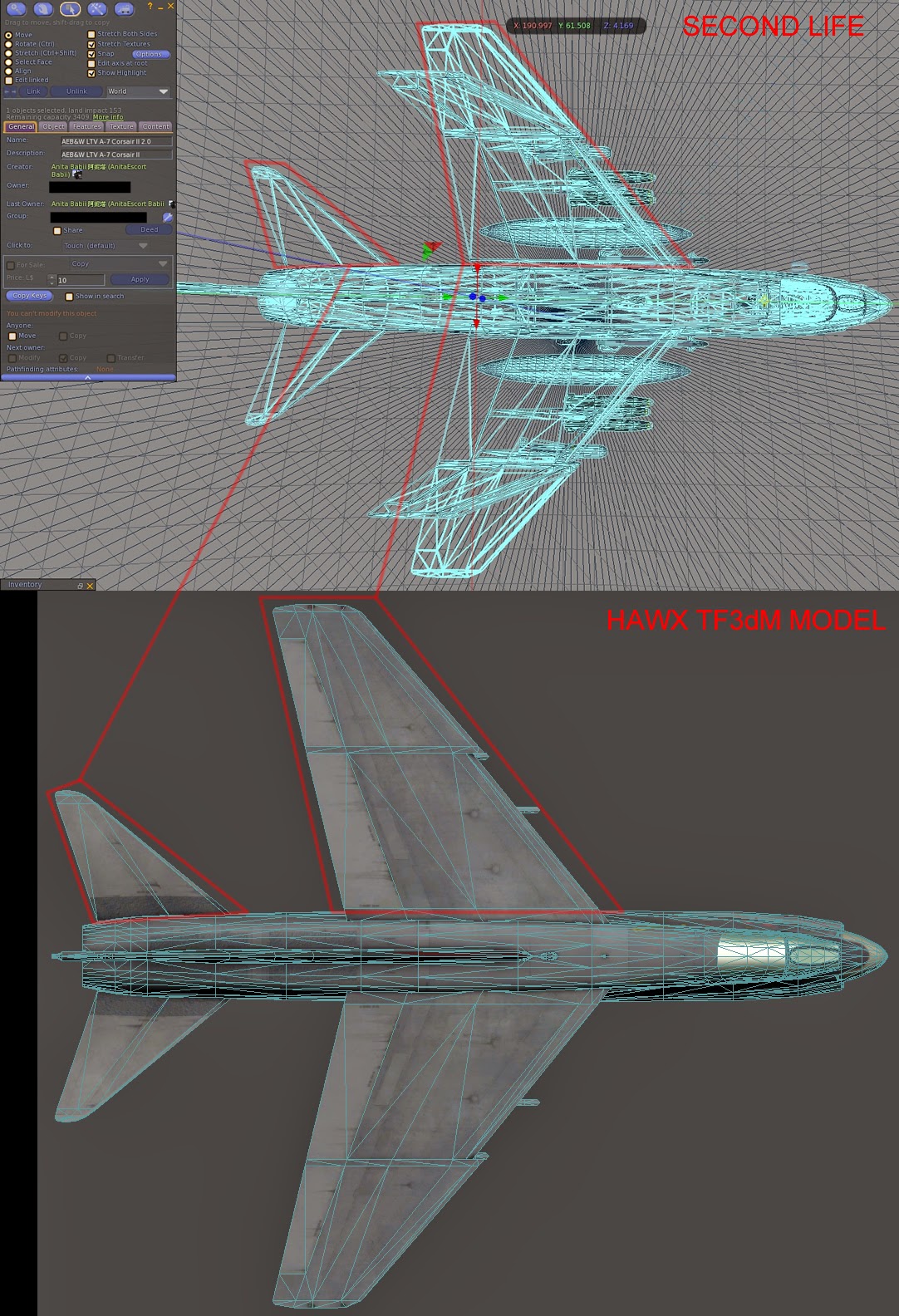 After viewing these wire frame comparisons, it is very clear that the body (not including landing gear and weapons) has been taken straight out of  Tom Clancy's H.A.W.X. The only original content in this aircraft is the recolored default livery that comes standard with the plane.
These models are protected by Ubisoft's Intellectual Property rights which this developer has breached. Annitah Babii will be held responsible for all violation if a DMCA report is filed by Ubisoft.

AEB&W is a confirmed Mesh Thief

☆Corey's Cache O' Crap☆, owned by jjws888 Resident, is a Second Life Marketplace merchant that sells a variety of items. We've found that most of their products are stolen and rigged video game models.
All of these models are from official Nintendo 64 games. Here's is a list of our findings:

And there are so many more..
Everything listed here has infringed Nintendo's Intellectual Property rights and Copyright for using official trademarked logos. Game ripped and copyrighted models make this a big Terms of Service violation.
Please avoid purchasing any of these products from this store and support original content creators.

jjws888 is just another Mesh Theif

Posted by Expose Second Life mesh stealers at 4:53 AM No comments:

Meshes Full Perm, owned by Pater Taurog, is a Second Life Marketplace Merchant that sells a variety of objects. We picked out many items that were from video games and other 3d model websites.

Here are some of the obvious game rips:

The product: ARM OF ODIN AXE or "VIKING AXE"
The original: "Wuuthrad" Greataxe from The Elder Scrolls V: Skyrim 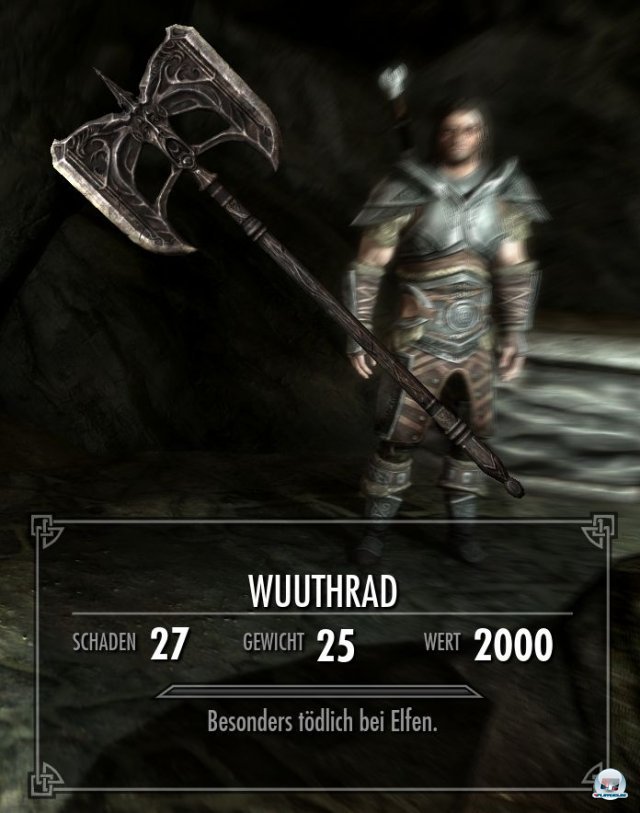 The product: PAIN OF KURIIS AXE
The original: Steel Battleaxe from The Elder Scrolls V: Skyrim 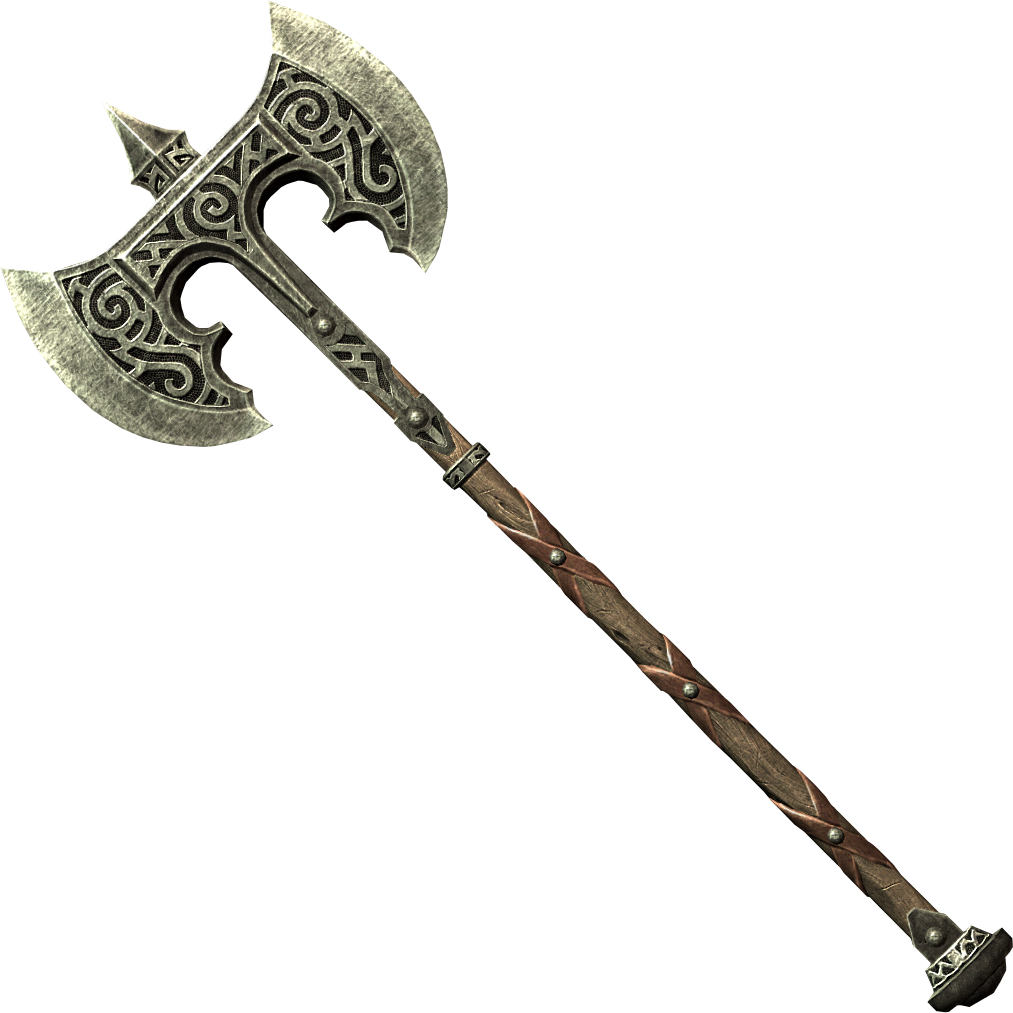 These meshes are from The Elder Scrolls V: Skyrim in which the intellectual property rights belong to Bethesda.
If you want to buy some full perm mesh from MFP, please avoid these 2 items as they can be removed with a DMCA report.

To be expanded on...

UPDATE: This product has since been removed from SL by the uploader, we can only hope more follow their example.

UPDATE: We had previously listed Sal Fireguard as the creator of the Fastronnix UH-1H Huey. New evidence has surfaced that only the root prim of the helicopter contains Sal's name as the creator, but the rest of the aircraft was uploaded by Tronnix Tairov. 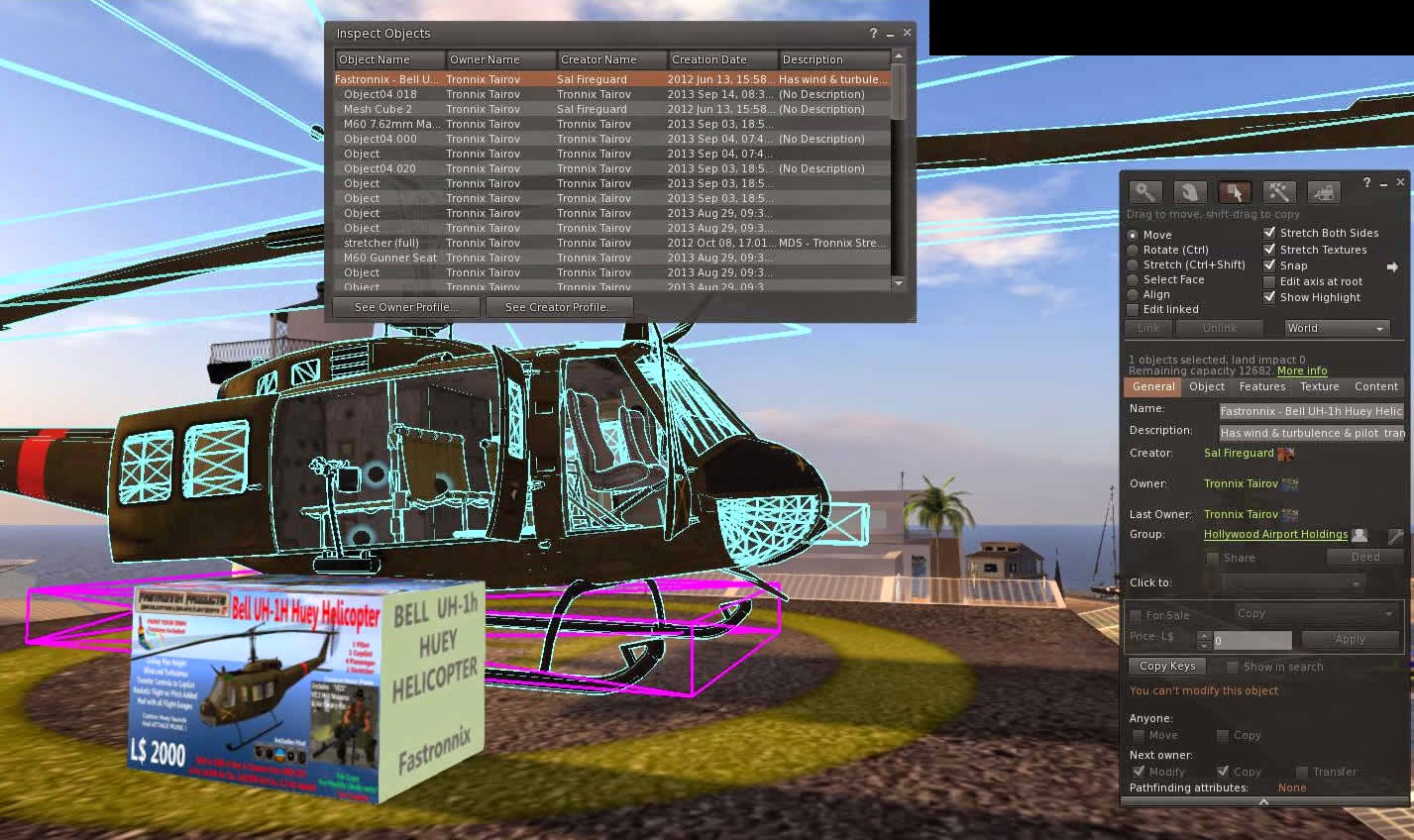 We formally apologize to you Sal Fireguard, as we had mistaken you for the aircraft's original creator.

Fastronnix Productions is a business that produces vehicles for Second Life. This merchant has in-world stores based at Blung, Hollywood Airport (SLHA), and a Second Life Marketplace page.
We've found a couple of suspicious mesh products in their Hollywood outlet, one of which was a Bell UH-1 Huey. Following the previous source of downloaded mesh models, we came across the exact same model and textures on TF3dM.com. 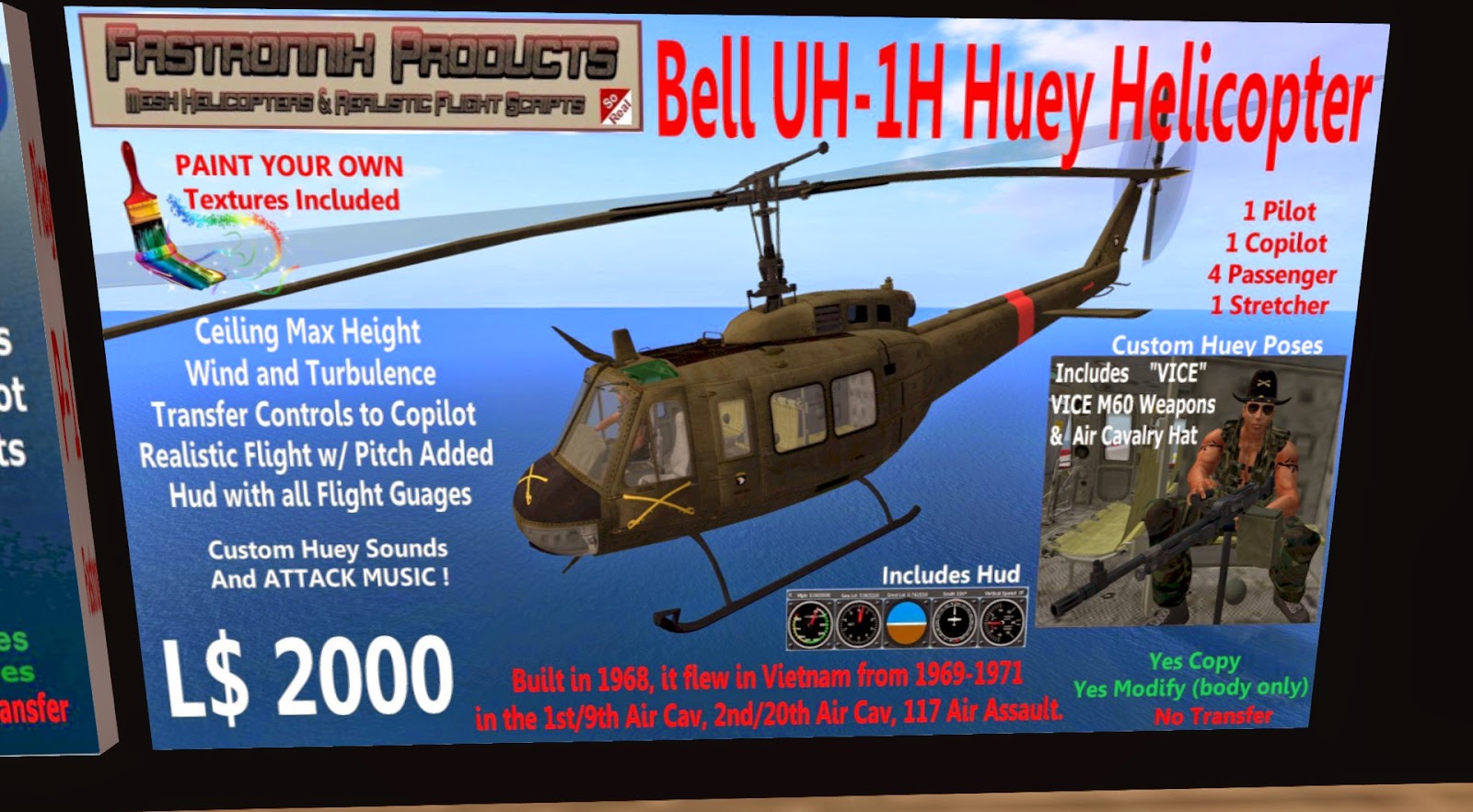 Here are some wirefrime comparisons. 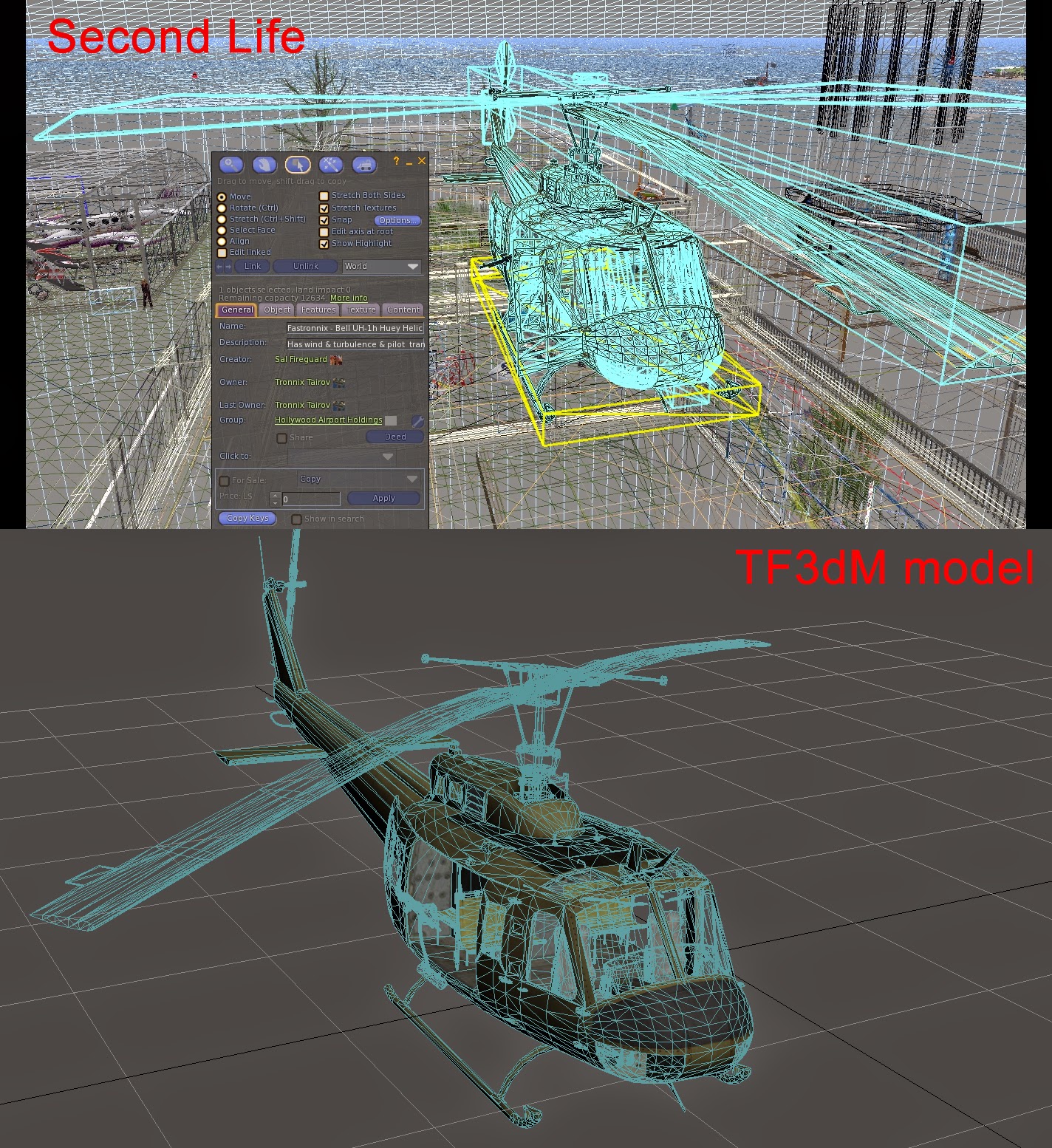 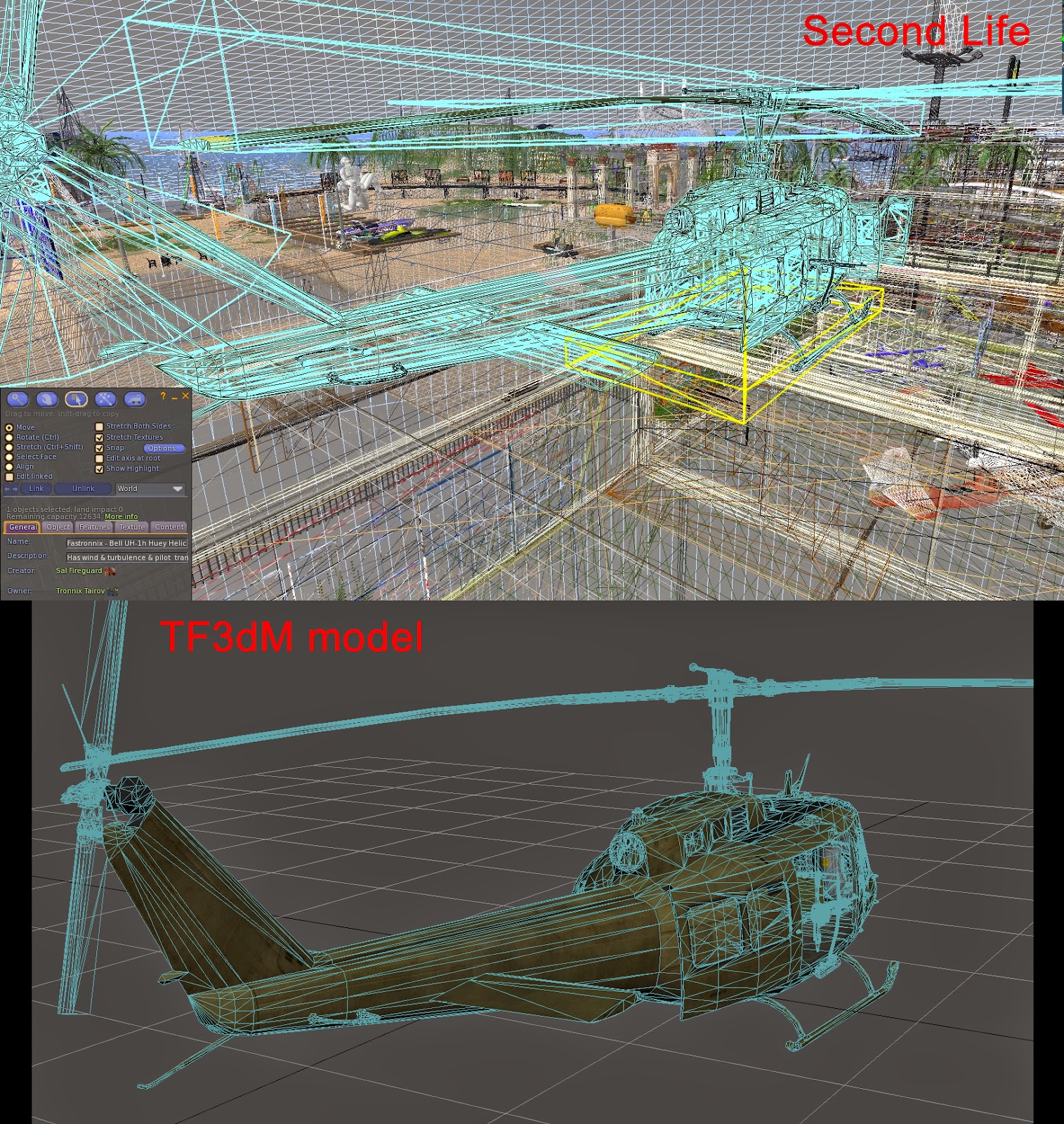 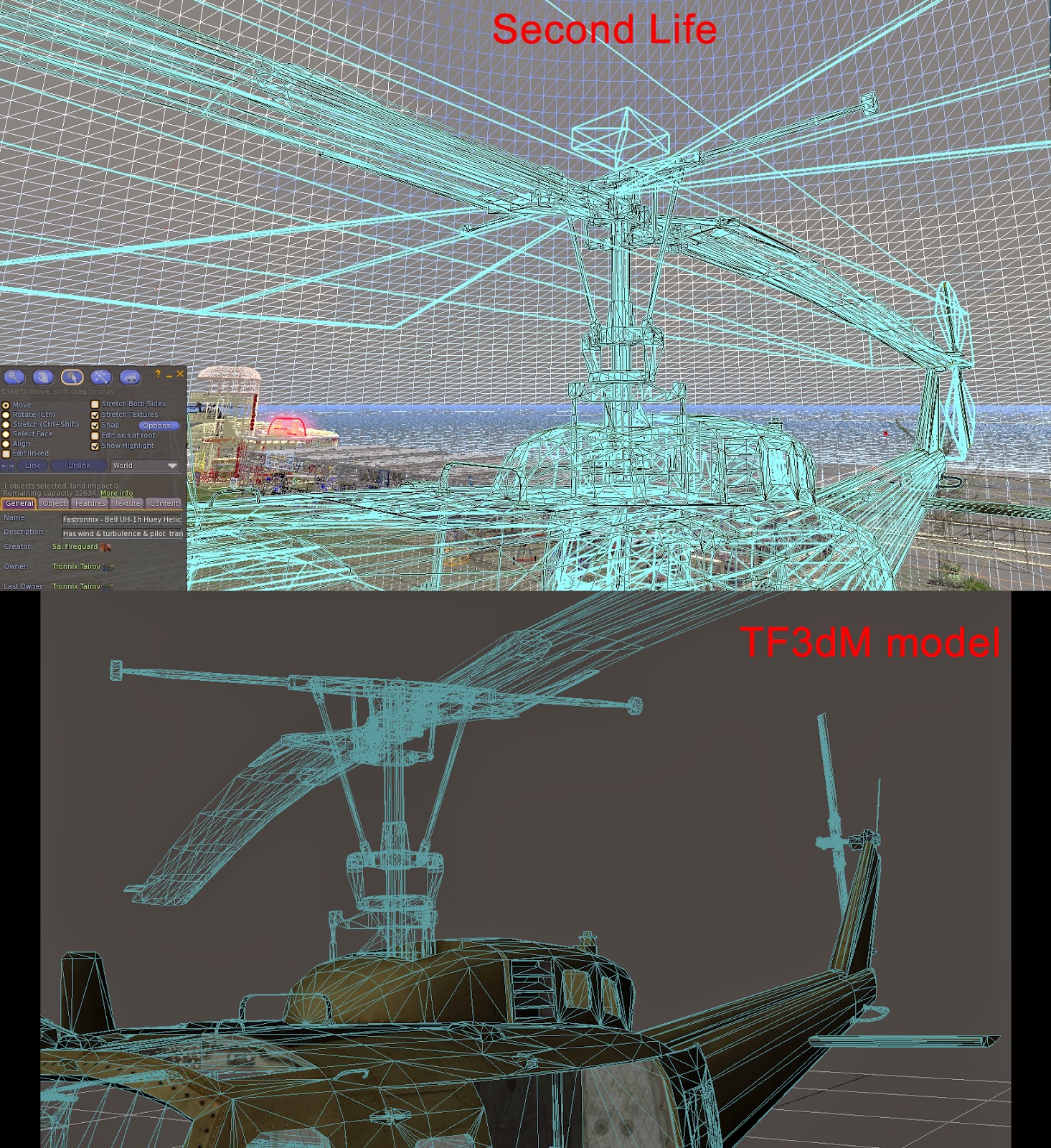 The Fastronnix wireframe is an exact match the the TF3dM model, eliminating our doubt. The only difference is that the engine's exhaust pipe has been pulled further back. 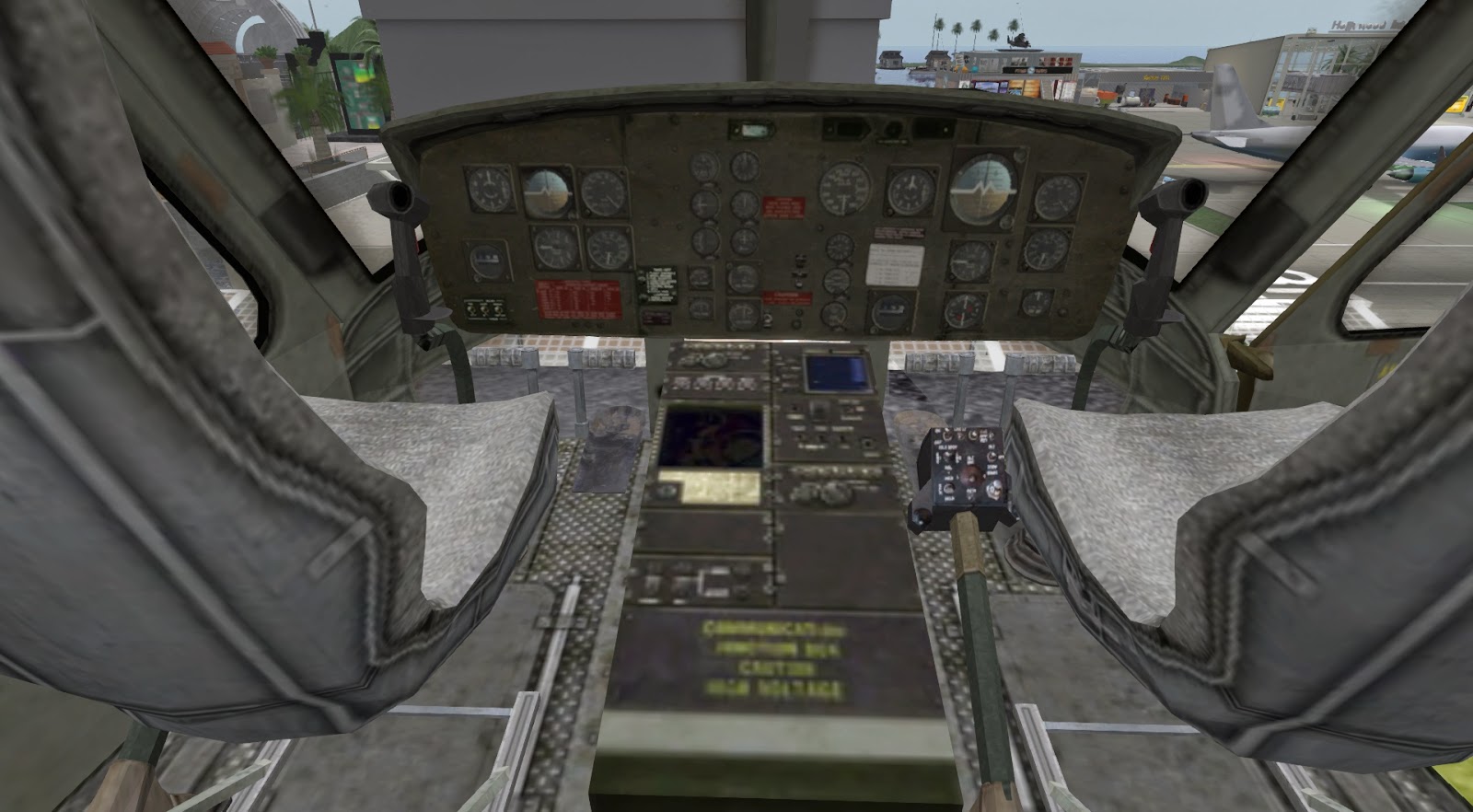 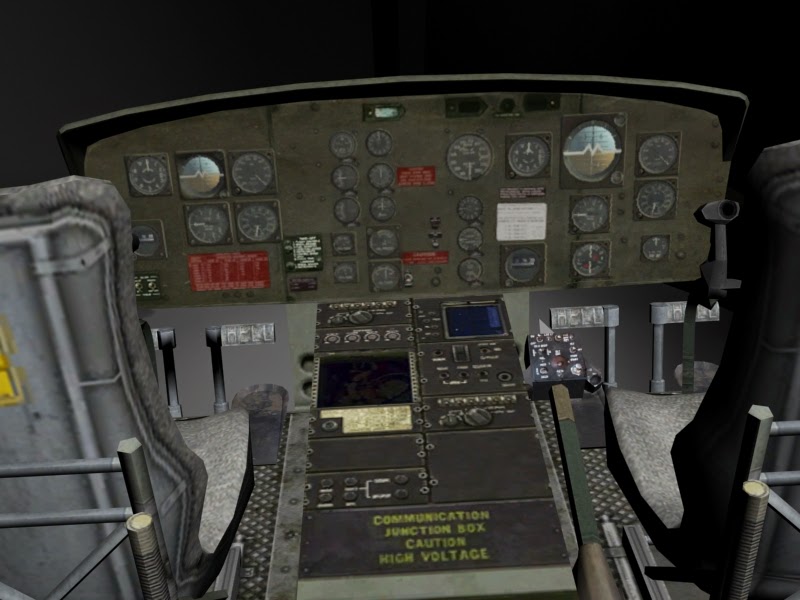 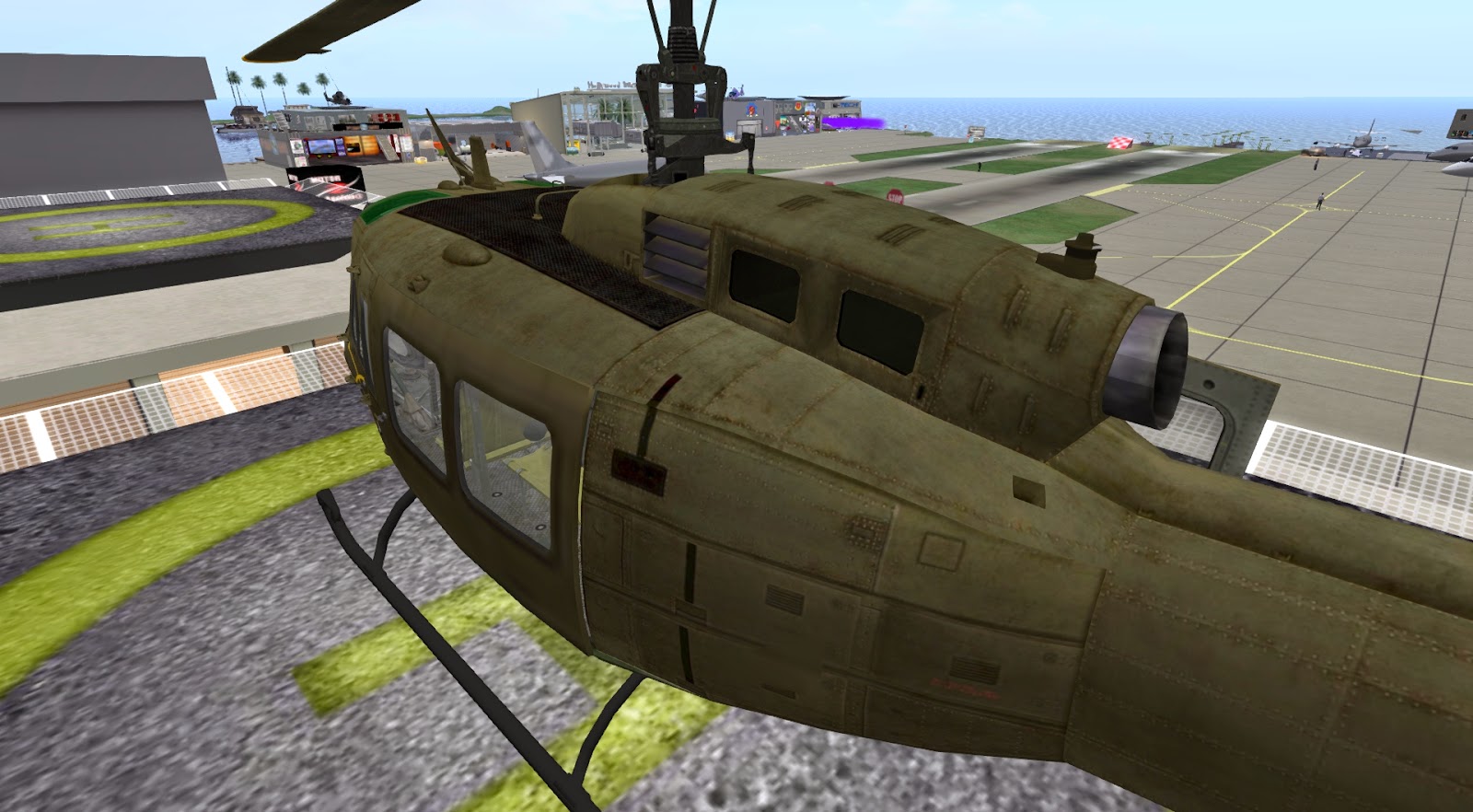 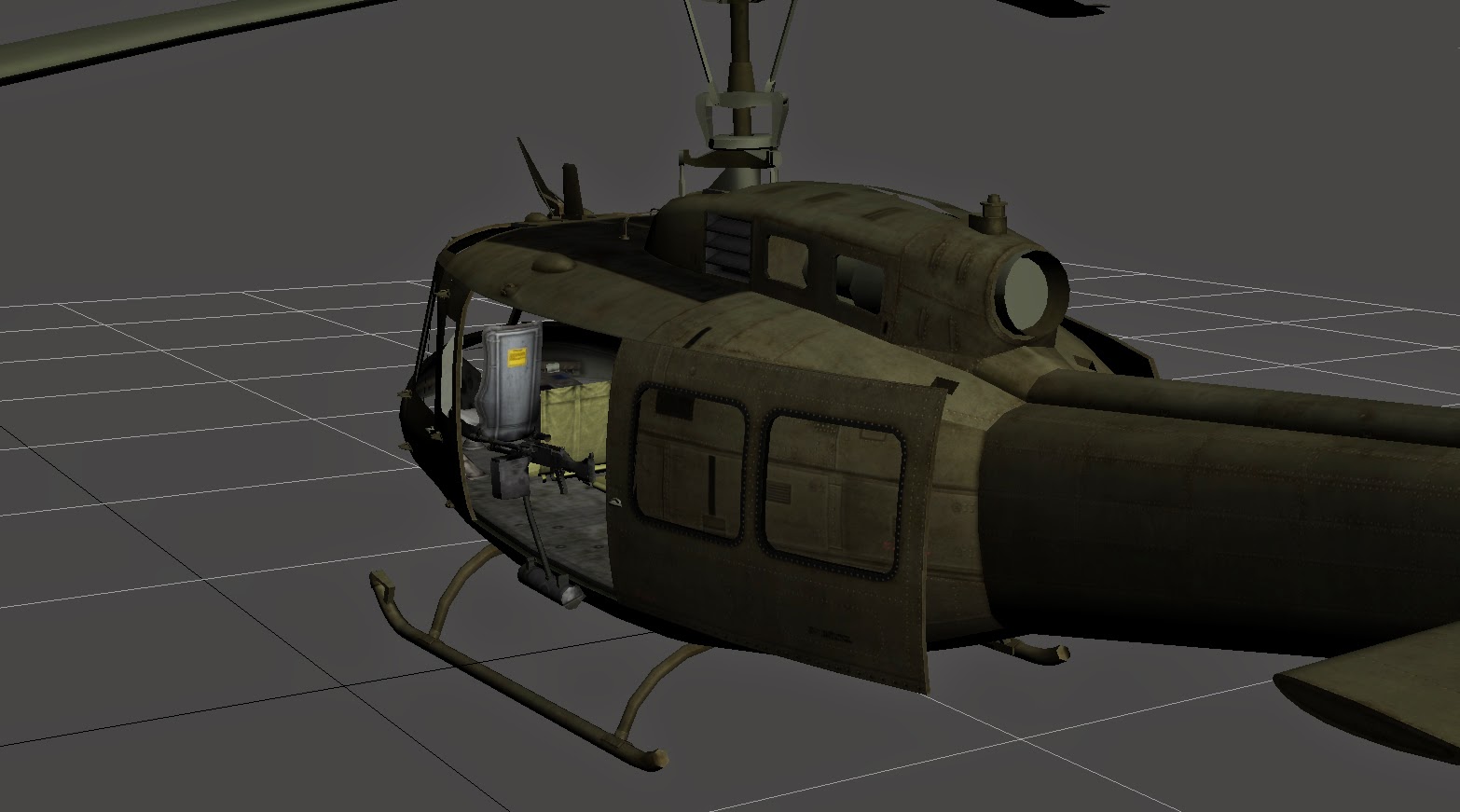 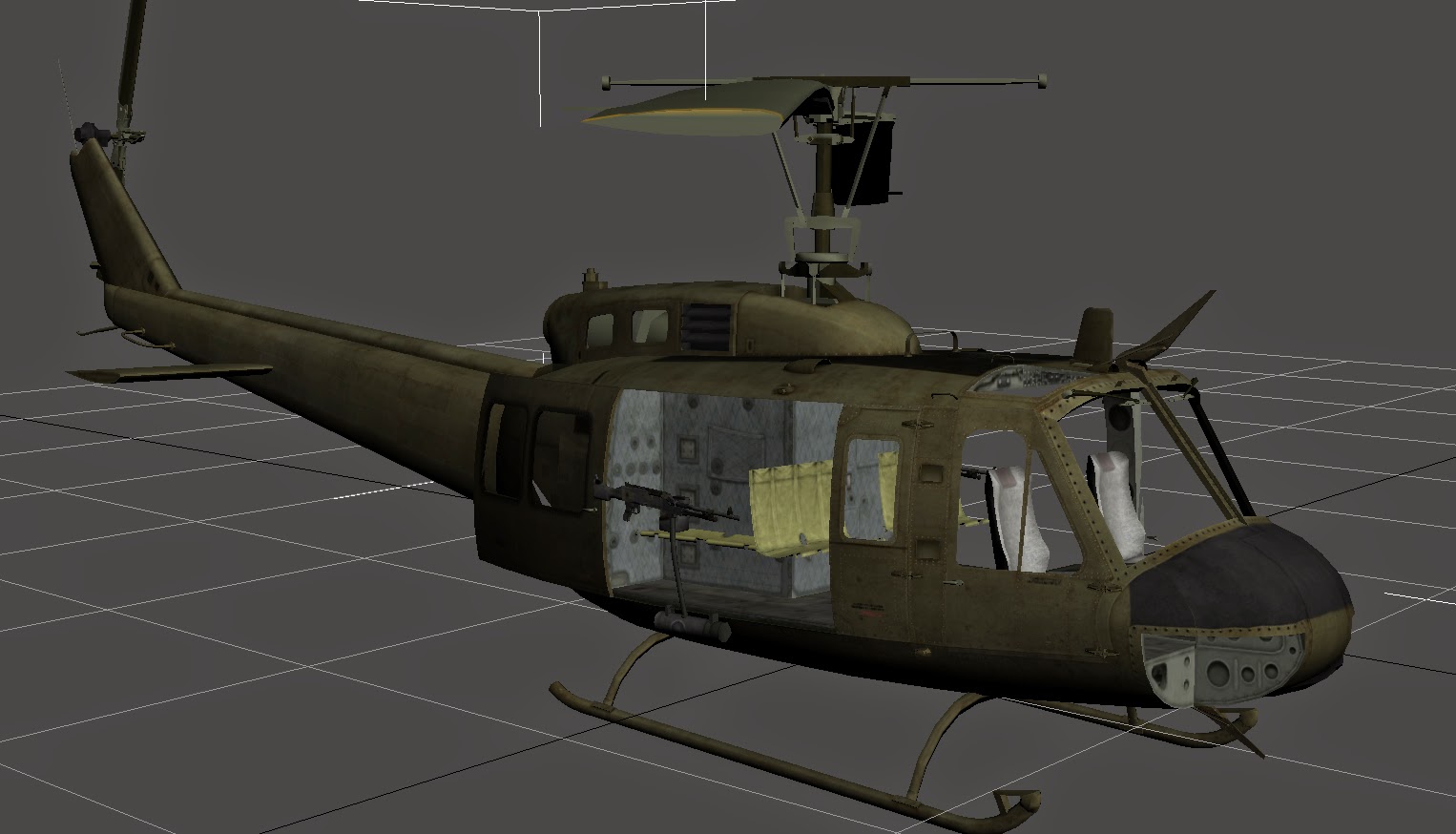 (top) Fastronnix Bell UH-1H Huey
(bottom) Bell UH-1H Huey from TF3dM.com
The only difference that's been noted is the yellow rapiers crossing on the nose and sides of the helicopter, and a red band around it's mid-tail. Besides these differences, the markings and texture quality between both models are exact. 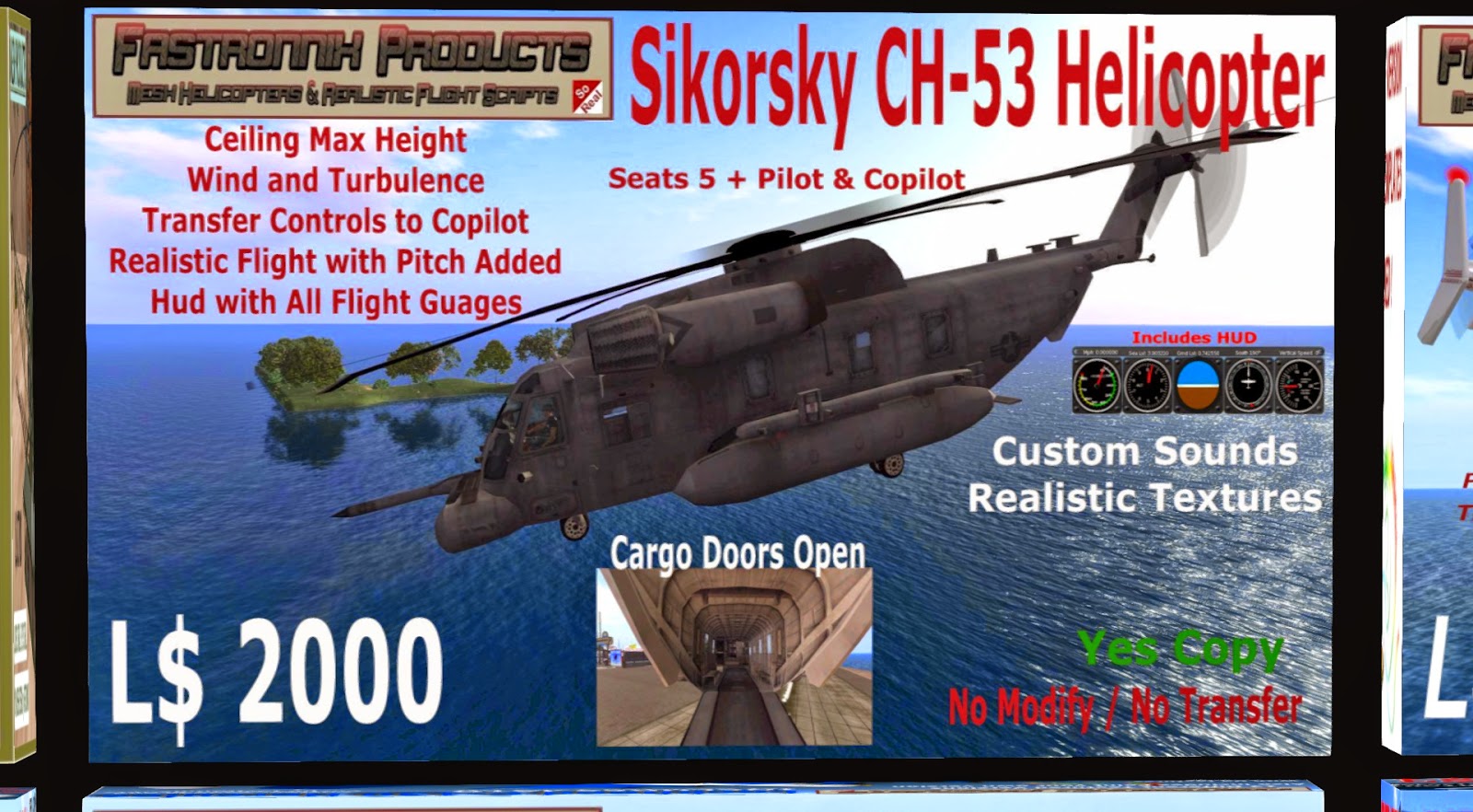 (top) Fastronnix CH-53
(bottom) MH-53 Pave Low from GTA Garage
The only model source we could find of this game rip was from a GTA: San Andreas mod. You'll find that the marking positons and overall quality between the two models match. The rotors and hub have been replaced with another prim or mesh.

The aircraft's creator is Tronnix Tairov and will be reliable if a DMCA report is filed.
This UH-1H Huey can only be found in-world and inadvertently conceals the product from being searched on the internet.
Either way you look at it, these products are in violation of the Terms of Service and shouldn't be on Second Life.
We're yet to find this model's true origin of the CH-53 and we will update this post whenever the information becomes available.

Customer's of Fastronnix should consider this information before purchasing any further products from them.
Posted by Expose Second Life mesh stealers at 1:30 PM No comments:

Vlad Blackburn is a merchant on Second Life Marketplace who sells a variety of products, from accessories right through to vehicles. A couple of vehicles showed suspicious signs of video game originated models. Here's a list of our findings. (top) Vlad's space ship (bottom) Nintendo's F-Zero's Blue Falcon
This was a very easy find for us. This model has been ripped from F-Zero GX, produced by Nintendo for the GameCube, and put up on TF3dM.com, which is  the most probably area in which Vlad found this model. Despite there being no writing or logos, the markings in the texture are the same and the texture has simply been tinted.
This design is Copyrighted by Nintendo and will most likely be removed from Second Life if a DMCA is filed. (top)Vlad's F22 Trainer (bottom)H.A.W.X F-22A Raptor
Again, another H.A.W.X model from the same website we've listed before in this blog. You'll find that the marking, vents, and lines match up exactly to Vlad's "F22 Trainer". The over all texture quality, by color and clarity, is also equal of that to the H.A.W.X model.

It is without a doubt,

Our goal is to expose residents who infringe intellectual property rights with hard evidence in order to protect hard-working original content creators for Second Life.
We're also wanting to educate the general public on how to spot ripped or illegally uploaded content.
Stealing is wrong. So, if you didn't make it or you don't have permission from the creator...
DON'T UPLOAD IT

Why we shouldn't upload non-user mesh?

2.7 You agree to respect the Intellectual Property Rights of other users, Linden Lab, and third parties.

" You agree that you will not publish, or submit to any part of the Service, any Content that is protected by Intellectual Property Rights or otherwise subject to proprietary rights, including trade secret or privacy rights, unless you are the owner of such rights or have permission from the rightful owner to upload, publish, or submit the Content and to grant Linden Lab and users of the Service all of the license rights granted in these Terms of Service."